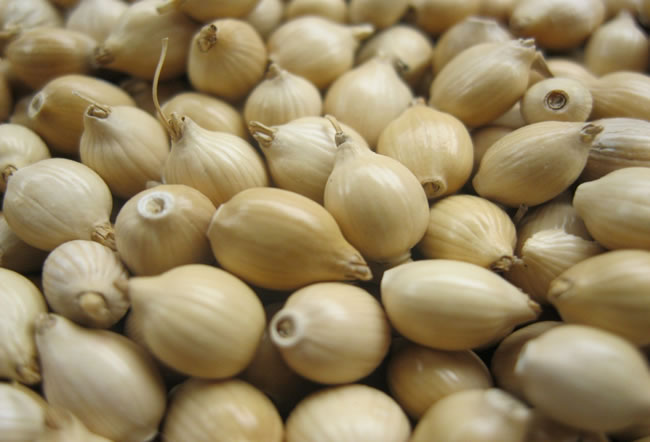 Many of you may not even heard of “adlai“, a tall-grain bearing tropical plant from the Poaceae or grass family. This is the same family to which corn, wheat and rice belong.

Adlai produces good yield in areas where rice and corn hardly grow like in the highlands. It can tolerate poor soil quality, waterlogging, low pH and is resistant to pests.

Also, it has been abundantly growing in the Philippines, and is being cultivated since ancient times as staple food. In Midsalip, Zamboanga del Sur, it is extensively cultivated in parallel to rice.

Adlai as a Rice Alternative

Just like its rice and corn counterparts, adlai is highly nutritious. It is the reason why the Department of Agriculture in the Philippines, is promoting Adlai as a staple crop which may help solve the country’s chronic insufficiency as far as rice is concerned.

Adlai takes a more time to cook compared to rice, due to the size of the grains. But, compared to white corn grits, the cooked Adlai grains is much softer in texture and is more compact.

Also, adlai has a pleasant mild flavor, which makes it a good ingredient in broths and soups. The grain on the other hand, can be ground into flour and can be use in making pastas, breads and porridge.

The pounded kernel can also be made into a sweet dish by coating and with sugar. While, it can also be husked and consumed as it is. The parched seeds can be made into tea, while wines and beers are made from its fermented grains. Tea or coffee is made from the roasted seed.

Adlai is also being utilized as an alternative remedy against various diseases like arthritis, appendicitis, beriberi, bronchitis, tumor, diabetes, fever, dysentery, headache and other ailments.

The local regional office director has stated that the regional office’s research stations are conducting further studies to discover the other potentials of Adlai. They plan to discover Adlai’s potentials through the integrated cooperation of private sectors, non-government organizations and the Department of Agriculture.

Consuming 100 grams per serving of adlai, will make you less likely to feel hungry after awhile, as compared to eating corn or rice. This is because adlai contains the highest food energy content at 356 kcal, as compared to corn, brown rice or white rice.

Therefore, if you consumed a cup of steamed adlai for lunch, it is build to last for 1 whole day’s work, as compared to those who consumed rice.

Related Articles:
1. 5 Foods High in Iron
2. What are the Benefits of Chayote
3. How Does One Tablespoon of Olive Oil Daily Affect Your Health?

Health and Beauty Uses of Cumin

Place These Plants In Your Bedroom to Help You Sleep Better

Is Cancer a Preventable Disease? So Why are We Not Preventing it?

What Happens to Your Body When You Add Lemon Peel in...

Create Your Own Lipstick With This Very Easy Recipe!