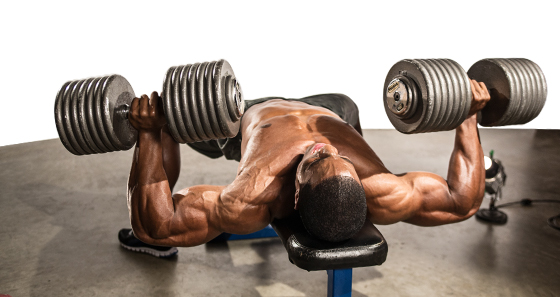 Along a massive back, broad shoulders, muscular legs, huge arms, and chiseled abs, a popping and defined chest adds aesthetics to a person’s physique. Barbells and cables are key equipment for chest training; however, dumbbells also serve as efficient tools for chest development. As opposed to the former two, dumbbells are more portable and they allow wider range of motion.

In line with dumbbell exercises for the chest, the following are some workout routines that a person can do.

The incline dumbbell chest press is one of the dumbbell workout exercises for the chest. According to Build Muscle 101, the exercise works the upper pectoral muscles, including the front head of the deltoids and the triceps.

To perform the exercise, the person lies while holding dumbbells, with the palms of his hands facing each other. Then, he uses his thighs to help push the dumbbells up. The dumbbells are lifted one at a time so they can be held at shoulder width. Once the dumbbells are raised to shoulder width, the person rotates his wrists forward so the palms of the hands are facing away from him. A good practice is to control the dumbbells fully at all times and they should be pushed up with the chest upon breathing out. After that, the person locks his arms a the top and holds for a second. After the pause, he gradually lowers the weight, which should take twice as long as raising them. The movement is done for the recommended number of repetitions.

The flat dumbbell fly is another workout exercise for the chest, without the need for a barbell or cables. According to Body Building, the exercise targets the chest in an isolation mechanic and pushing force.

The person does the exercise by lying down while holding dumbbells, with the palms facing each other. Then, he uses his thighs to help raise the dumbbells, lifting them one at a time so he can hold them in front at shoulder width. Next, the person raises the dumbbells up, but he stops and holds just before he lock out. After that, the person inhales as he lowers his arms out at both sides, with the elbows slightly bent in order to avoid stress at the biceps tendon, until a stretch on the chest is felt. The arms should be kept stationary throughout the movement and it should only involve the shoulder joint; this means the same motion arc is used in lowering the weights. Then, the person brings back his arms to the initial position as he exhales and squeezes his chest muscles.

Another variant of chest exercise using the dumbbells is the decline dumbbell press. Just like the former two exercises, the decline variant also utilizes pushing force, but it targets the lower part of the chest or pecs.

Overall, the chest serves as one of the major muscles that boost a person’s aesthetic physique and they can be developed by means of dumbbells, in addition to barbell and cables. It is important to keep in mind that maximum chest development is achieved when constant training is coupled with proper nutrition and adequate rest.

How to Remove Age Spots Using This Homemade Face Mask

How to Use Orange Peels as Facial Steam Treatment

9 Foods You Should Avoid After Age 30

How to Use Mint for a Refreshing Beauty Routine

How to Get Rid of Chest Acne Using These 3 Ingredients

7 Amazing Things Your Body Does While You Sleep

How to Relieve Flu Symptoms With These 3 Tea Recipes

Tips to Consider Before Going Vegan

Never Ignore These 5 Common Symptoms That Could Indicate Cancer

9 Herbal Remedies You Should Try for Natural Pain Relief

Top 5 Chemicals in Processed Foods that Ruin Your Health

6 Effective Ways to Cut an Onion Without Crying