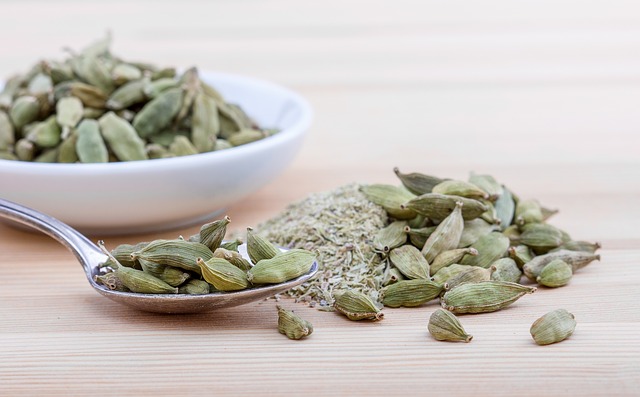 Cardamom is known as the “Queen of Spices,”, and is the world’s most expensive spice after saffron and vanilla.

Cardamom is native to the evergreen forests of India and is frequently used in Indian dishes. It has also made its way into Ayurvedic medicine as a treatment for digestive problems, mouth ulcers, and even depression.

Some of the health benefits of this citrusy and peppery spice are now making their way into modern studies. It worth adding cardamom into your dishes for the flavor alone, but these health benefits are also something to consider.

Cardamom can be used as a remedy for asthma and other respiratory problems. A study reported that the crude extracts present in cardamom were effective enough in opening up constricted windpipes in lab animals.

Also, cardamon were effective in causing relaxation to the tracheal tissues. This preliminary study has been positive and needs further studies.

Cardamom is a very effective treatment for bad breath or halitosis. Just by chewing on the seeds can help in removing bad odors coming from your mouth. Some chewing gums also include cardamon as an ingredient.

A recent study that was conducted by the Department of Microbiology at Kurukshetra University in India, that was done to examine the anti-microbial effects of cardamom extracts on oral bacteria, showed that the extracts are effective against oral pathogenic bacteria, including Candida albicans and Streptococcus mutans.

Also, the main active component of cardamom oil, known as cineole, is a potent antiseptic, which is known for fighting the bacteria causing bad breath and other infections.

Cardamom shows potential when it comes to cancer treatment. Animal studies showed that it can be used as a chemopreventive agent or to inhibit, reverse or delay cancer formation.

A 2012 study that was published in the Journal of Medicinal Food showed that cardamom had a positive effect on skin health in animals. Researchers reported a significant reduction in the occurrence and number of tumors with oral administration of cardamom powder. The study concludes that cardamom has potential as a chemopreventive agent against 2-stage skin cancer.

The phytochemicals that are present in cardamom, including limonene and cineole displayed an ability to take on a protective role against the progression of cancer.

Cardamom is also used as a diuretic in Ayurveda, which can help in preventing heart failure and lowering blood pressure. Also, modern science reported that cardamom can help your heart and not just with its diuretic effect.

Studies conducted at the Department of Pharmacology and Pharmaceuticals at the College of Pharmacy of King Saud University, in Saudi Arabia reported that cardamom administration for cardiovascular conditions have resulted in controlled rhythm or a lower heartbeat, and control of hypertension.

The micronutrients present in cardamom helps counteract the surge of lipids in the body. In studies done at the Pharmacology and Toxicology Division at Hindustan Antibiotics Limited in Pune, India by Dhuley, the cardiac and hepatic antioxidant enzymes from cardamom were administered to mice, which were given a high-fat diet. The antioxidant enzymes had an influence on the cholesterol levels, therefore, helping in significantly controlling them.

Related Articles:
1. 5 Best Herbs and Spices to Boost Your Fertility
2. 7 Herbs & Spices You Can Use for a Diabetes-Friendly Diet
3. What is This Spice That Reduce Heart Attack Risks, Restores Gut Bacteria and Fights Cancer?

Nutritionists Called This Fruit the Most Healthy Fruit for Heart Health

Did You Know That The Secret to Beautiful Skin Is In This Smoothie?

How to Use Onion for Hair Growth?

How to Reduce Your Stress? Eat More Vegetables, Study Says

4 Best Types of Non-toxic Cookware You Should Be Using

Beauty Benefits of Tomatoes: How to Use Tomato in Your Beauty Application

7 Things Your Feet Can Tell About Your Health

Turmeric: The Amazing Spice Which Can Help Reduce Eczema Symptoms

6 Ways To Boost Your Testosterone Naturally

5 Natural Ways to Get Rid of Neck Fat