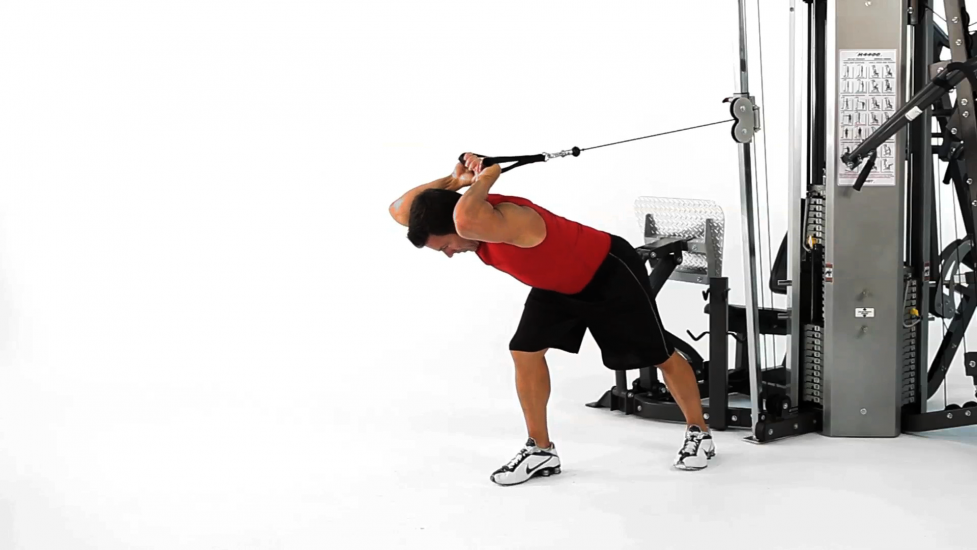 Along with the biceps, the triceps are the notable muscles of the arms and they help a person lift heavier weights during a workout. In addition, the three-headed arm muscle add to the contour and aesthetics of one’s body. Aside from the dumbbell raises and skull crushers, the following are some cable exercises for the triceps one can perform.

The exercise is started by attaching a rope to the bottom pulley of the pulley machine and grasping the rope with both hands. Then, the person extends his arms with his hands directly above his head with a neutral grip or palms facing each other. It is important that the elbows are close to the head while the arms should be perpendicular to the floor, with the knuckles going to the ceiling’s direction. Once done, the person breathes in as he gradually lowers the rope behind his head as he holds his upper arms unmoved. The person pauses when the triceps are fully stretched. Then, he breathes out as he flexes his triceps and returns back to the starting position. The exercise is done for the recommended number of repetitions.

According to the publication, a good practice is to perform the exercise with the arms straight up and the elbows pointed toward the ceiling. This way, the stretch on the triceps will be optimized, as well as the tension in the final position.

Another cable substitute for a dumbbell triceps exercise is the seated low pullet overhead triceps extension. According to Muscle and Strength, it is also an isolation pushing exercise that promotes triceps strength.

To perform the exercise, the person places a 90-degree bench in front of a cable pulley machine, facing away from it. Then, he attaches a straight bar to the low pulley and chooses the weight he wants to use on the stack. After that, the person grabs the bar behind his neck with an overhand grip at shoulder width and sits down with his back flat against the bench. While keeping the feet flat on the ground, the person’s forearms should be kept parallel to the floor and the elbows should be pointed to the ceiling. For the starting position, the bar is grasped behind the head, with the palms facing up. Once ready, the person moves only at his elbow joints and gradually pushes the bar straight up until the arms are fully extended. Then, he keeps his upper arms stationary and pauses upon the contraction and then gradually brings back the bar to the starting position. The exercise is done for the recommended number of repetitions.

As per the publication, a good practice is to concentrate on moving the weight with the triceps, with the person keeping control of the weight as he slowly lowers it back to the starting position. Also, the body should be stationary as possible, with the forearms engaged in the movement. The head should also be kept up, straight ahead during the movement.

Overall, the triceps contribute to a person’s aesthetics, together with the biceps, chest, back, legs, shoulders, and abs. It is important to keep in mind that maximum triceps development is best achieved through the combination of consistent training, proper nutrition, and adequate rest.

7 Healthy Ways to Use Baking Soda

4 Best Remedies for Dry Skin on the Feet

Exercises to Part Ways with Your Love Handles

Why You Should Always Start Your Day With Ginger

The 3 Healthy Habits That Will Keep Obesity at Bay

How to Lighten and Soften Your Hands with Citrus

What to Eat When You Have a Cold