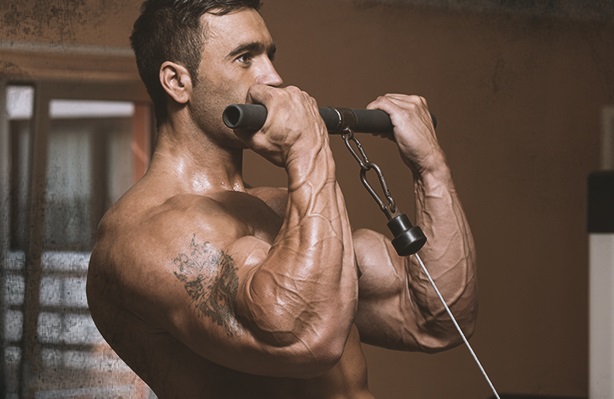 The biceps symbolize a man’s strength, power, and masculinity. Also called guns, they help create a defined look in a man’s physique, along with defined triceps, chiseled abs, muscular legs, massive back, big chest, and broad shoulders. While the barbell and the dumbbell curls are key exercises for the biceps, cable exercises also contribute to a person’s overall bicep development.

The cable curl is one of the isolation pulling exercises that improves bicep size and strength, according to Muscle and Strength. To perform the exercise, set up the cable curl. Fasten the straight bar to the low pulley cable and choose the weight on the weight stack. Then, he stands facing the cable machine with his legs shoulder width apart. After that, he grasps the bar with an underhand grip or palms face up, while the hands are about shoulder width apart. A good practice is to keep the elbows tucked in by the sides while the bar is gradually curled up as high as possible; also, they are not allowed to come forward as the weights are curled up. The person squeezes the biceps at the top of the motion and pauses for a second, before gradually lowering it back to the starting position.

The rope hammer cable curl is the cable version of the hammer dumbbell curls. According to Body Building, it is an isolation pulling exercise that also targets the biceps. The exercise is started by attaching a rope attachment to a low pulley. Then, the person stands facing the machine, at least 12 inches away from it. After that, he grabs the rope with a neutral grip or palms in and stands straight up while the back is kept with a natural arch and the torso is kept unmoved. Next, the elbows are put in by the side and are kept stationary during the entire movement. A good practice is that only the forearms should move and not the upper arms. Once ready, the person pulls the arms up as he breathes out, until the biceps touch the forearms. It is important to keep the elbows in and maintain the upper arms stationary. Following a second of contraction at the top of the movement, the person slowly lowers back the weight to the original position. The exercise is done for the recommended number of repetitions.

By using the standing high pulley cable curl, fasten a single grip handle to the high pulley cables and select the weight on the stack. Then, he grips each of the cables with an underhand grip or palms facing up and stands in the center with the arms outstretched. After that, the person keeps his upper arms and body stable while curling the handles in towards the body as far a possible. He pauses for a second at the point of contraction and then slowly lowers the weight back to the initial position.

Overall, the biceps boosts a man’s strength and body aesthetics, along with the other muscle groups. While they are not as large as the chest and back muscles, they assist in lifting heavy weights, just like the triceps. Just like the other muscles of the body, maximum bicep development is best achieved through constant training, proper nutrition, and adequate rest.

What You Should Know About Kombucha

The Popular Way To Prepare Eggs That Has Everyone Going Crazy

6 Tips to a Faster and Safe Weight Loss

This Natural Homemade Recipe will Speed Up Hair Growth

Healthiest Ingredients to Add to Your Smoothies

Find Out How Eating Apples Everyday Can Help You Lose Weight

Eat These Foods for Pearly Whites that Stun