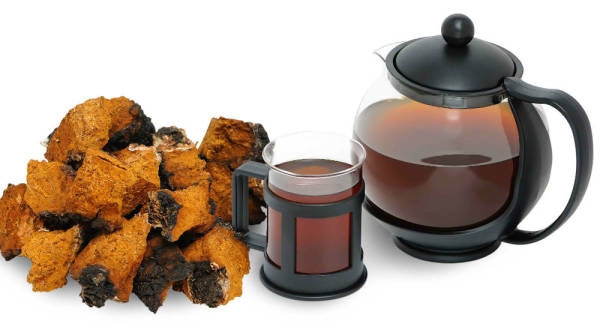 Chaga mushroom or Inonotus obliquus, is a fungus that grows abundantly on birch trees. It is mostly found in northern regions, including the Northern U.S., Canada, Russia and part of Northern China. It has been used medicinally years and some of its health properties come from the birch tree itself.

How it Looks & Taste

Chaga does not look like a typical mushroom at all. It has a black, hard, woody exterior, while its caramel brown interior is fibrous and dry. A small hatchet is needed to divide the large chunks of chaga into pieces, due to its solid form.

Chaga mushroom tea has a pleasant and slightly bitter taste, combine with a hint of vanilla. It is a blend between strong black tea and coffee without the caffeine or any other stimulants.

It also has the highest ORAC score or the measure of antioxidant potency of any super-food.

3. Boost Immune System
Chaga mushroom contains Beta-D-Glucans, that helps balance the response of the body’s immune system. It helps boosts the immune system when needed and slows it down when overactive.

4. Protects Against Infection
Chaga mushroom are rich in substances that prevent the growth of bacteria, fungi, viruses, microbes and candida.

Chaga mushroom are added as exfoliants to skin scrubs and soaps. Chaga facial creams are also available in the market today, that contains antioxidant, anti-bacterial and anti-inflammatory properties.

Preparation:
1. Simmer the chaga chunks in 1 quart water for at least 10 minutes. If the color is that of light tea, simmer a little longer.
2. Strain and put nut milk and maple syrup if desired.

Preparation:
1. Combine all ingredients and add pinch of allspice and cinnamon.
2. Blend until smooth.

Note: You can add more chaga tea if consistency is too thick

Daily Habits That Will Help You Get Fit Slowly but Surely

How to Make a Healthy Fruit Sauce for Pancakes

What are the Benefits of Drinking This Health Boosting Tea Daily?

Organic Strawberries Found to Prevent the Growth of Cancer Cells

How to Naturally Remove Uric Acid Crystals in Your Joints

Nourish Your Hair With This DIY Hair Oil Recipe

How to Effectively Whiten Your Teeth Instantly!